The northern-Dutch clay grounds. From around 600 BC, countless earth mounds were built in this area, the so-called âterpenâ (terps) and âwierdenâ. These elevated dwelling mounds are still a typical feature of the northern-Dutch coastal landscape.

You can read the unique history of the terpen- and wierden land on this page. It is still a story in development. But you can witness how the story develops into a broader narrative. By adding more and more relevant facts and thanks to the work done by researchers, residents and local (historic) associations. Together they will revive the story of the entire region and those of the villages that belong to this unique landscape.

The story of the terpen- and wierden land takes place in an extraordinary setting: an ancient cultural landscape in the northern tip of the Netherlands. And the protagonists? That role is played by the people who once lived there. With the water as their main opponent, a force that has always shaped the landscape of the terpen- and wierden land. The common thread that runs through this story is the relationship between man and water. The ruthless tides against the fiercely brave and inventive inhabitants of the coastal region. A fascinating love-hate story unfolds. But above all, this relationship was the reason for building âelevated moundsâ, which â centuries later- are still a prominent part of the landscape. And to this day, they still have so much to tell and offerâ¦

Not a sad story

The story begins about 700 years BC, when the salt marshes along the coast had become high enough for human settlement. The vast grasslands of the saltmarshes alone were enough reason for people to settle in the coastal lands. And the fertile sea clay was ideal for agricultural purposes. Despite the fertile surroundings that the area constituted, the image of an impoverished region in which the population dwelled in misery, persists to this day. A place where people lived in isolation and fled to the nearest earth mound, when the high tide came in. Which is quiet unlike the truth and therefore, constitutes an image problem. 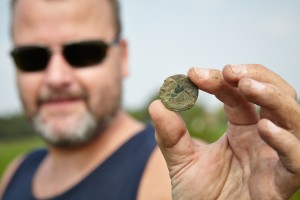 In fact, the coastal region in the northern part of the Netherlands was quiet prosperous. This becomes evident from the many gold-, silver-, and brass jewelry pieces and coins discovered in the area. These discoveries point towards the existence of a local elite class. People who liked to show off their importance and wealth. The finds also show us that the area was not isolated at all. From the early middle ages, the residents of the northern clay grounds maintained extensive trade networks with Scandinavia and England. In addition, various Roman artifacts found in the area demonstrate that the northern coastal region even played a significant role in an international setting.

Undeniably, the saltmarshes were submerged now and then. But soon, the inhabitants learned how to use this natural dynamic for their own benefits. The occasional flooding carried fertile sludge into the area, which made the soil very suitable for cultivation of various crops. The vast grasslands were used for harvesting hay and as grazing grounds for cattle. And the sea brought fish and shellfish to the table. Recent research also points to a large diversity within the area. For example, a wierde like Godlinze, in the province of Groningen â near the spot where the Dollard River flowed into the Wadden Sea â must have looked completely different than villages like Firdgum and Wijnaldum, terps that were located much further from the influx of fresh water.

In early medieval times, around 1200, the embankment of the vast salt marshes started to take commence. One by one, dams were built to gain land from the sea. Most of the dykes had probably already been built before monasteries settled in the region. This proves that the construction of the dykes cannot solely be attributed to the monks. The first builders were probably farmers (possibly led by the local elite) that joined their forces and ultimately built a closed dyke system along the entire Wadden coast.

After the embankment of the coastal area, everything changed. Salty waters no longer drained the soil and villages and farms began to appear outside of the safe elevations of the earth mounds. Trees started to grow here and there and huge arable areas were created. On the lighter clay grounds, more and more grasslands disappeared to be replaced by farming land. The wealthier population built large farm estates, country manors and small castles (stinzen and borgen) on the heavier clay grounds. 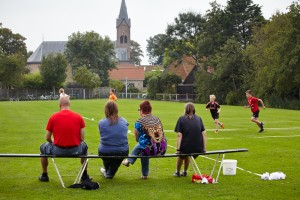 An impoverished image is not only an issue of medieval times: the current terpen- and wierden region suffers from the same problem. Many villages have dwindling population rates, a relatively high unemployment rate and the accompanying decrease in public services. Developments that have a negative effect on the quality of life in these areas. However, the situation in the villages is far from grim. Most of them have a strong sense of togetherness, a highly involved population and a rich history.

The goal
With the projectÂ terpen- and wierden land: Â a story in development,Â we use the past to shape the future. Based on archeological and historic data, our goal is to implement adjustments that increase the quality of life in the villages and enhance their image.Â To this end, researchers collaborate with local residents. We will begin with the villages ofÂ Ulrum,Â WarffumÂ andÂ Godlinze in the province of Groningen. Museum WierdenlandÂ in Ezinge will also play an important role in our research. In Friesland, the history ofÂ Firdgum,Â WijnaldumÂ andÂ HallumÂ will receive a close examination.

Every village has its own story

Every wierde- and terp has its own, unique history and story to tell. These stories will be carefully recorded with the help of localÂ residents and researchers. Read more about the story of

Literature
A huge amount of documents and narratives have been written about the habitation of the terpen- and wierden land.Â Click hereÂ for an overview of publications that give a good impression of its history or further illustrate certain items. Most of these publications are not hard to find and available in every well stocked library.