Terpen- and wierden land, a story in development will be carried out in several phases. During the first phase, the initiators will get to work in- and with six villages. Three of them lie in Friesland and three in Groningen. In these villages, archeologists and landscape experts will join forces with local residents to discover traces of the past. In the next phase, they will identify how to restore, maintain and develop the characteristic elements and structures in a sustainable manner. This adds an important visual element to the history of the village. All six villages have their own homepage on this website. On this page, you will find items like the story (in development) of the village plus an interactive village atlas. You can also read articles about significant events and news provided by local editors who live in these villages. Would you like to become a member of our editorâs staff, or know more about other ways to join in?

Hallum has about 2700 inhabitants, which makes it quite a large terp-village. The village is listed as a protected cultural site. A special feature is its large mound with a church from the 13th century built on top: the âGroteâ or Saint-Martins church. Around 1806, the collapsed gable-roof tower was rebuilt and a constricted peak was added to the structure in the process. Right next to the churchyard are a number of equally characteristic houses. MoreÂ pictures > 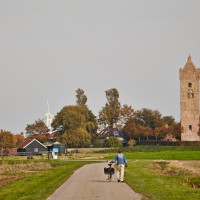 Firdgum has about one hundred inhabitants and an impressive number of terps: the village counts six of them in total. All of them are listed as national monuments. It boasts a striking, 13th century church tower with a church bell from 1471. The tower was part of the reformed church, which was demolished in 1794. Another noteworthy site is the reconstructed âzodenhuisâ (sod house), with walls made of grass sods, once a commonly used building material in the area.Â More pictures > 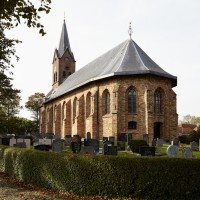 Wijnaldum counts about 350 inhabitants and is renowned for its âKings Terpâ (koningsterp) and fibula. This cloak pin was found by a local farmer in 1953 and probably once belonged to a person of noble standing. The gilded silver ornament, inlaid with gold filigree and red almandine, is on exhibition at the Frisian Museum and can be admired as an artwork in Wijnaldum.Â More pictures > 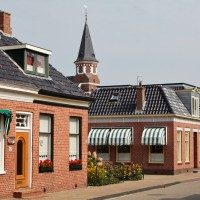 Ulrum has about 1500 inhabitants and is a so-called double-wierde. On one of the two mounds stands a Roman-Gothic church that dates back to the 12th century. The land near the second mound was once home to the Asinga family: they built their estate on the site of a huge farm estate in 1659. That the Asingaborg (borg=estate or small castle) must have had impressive dimensions, can be deduced from the documents left behind after its demolishment in 1809.Â More pictures >

Godlinze is a small village with about 265 inhabitants and an extraordinary wierde. This wierde is one of the highest mounds in the province of Groningen and has the structure of a cartwheel. Its small monumental houses and churches, which sometimes have an extraordinary interior, lend this village at the banks of the Fivel estuary a distinct character.Â More pictures > 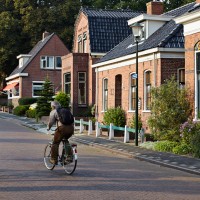 Warffum lies at the eastern banks of the former Hunze estuary and is part of a wierden-arch. It has around 2500 inhabitants and several monumental buildings. The mound serves as the building ground for a 12th century church and the entire village is listed as a protected site. Another noteworthy detail: part of the village belongs to the open-air museum Het Hoogeland.Â More pictures >

Approach within the villages

Every terp- and wierde-village has its own story. Residents, local (historic) associations, entrepreneurs and researchers of the University of Groningen will join forces to bring this story to life. In order to determine what is needed to restore, maintain and/or to develop the characteristic elements and structures in a responsible and sustainable manner.